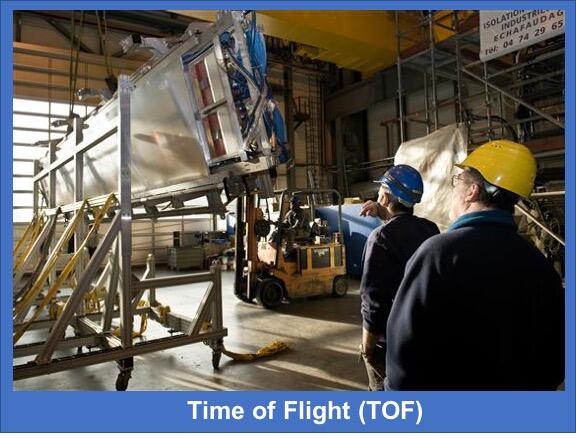 The Time Of Flight (TOF) measures, with a precision better than a tenth of a billionth of a second, the time that each particle takes to travel from the vertex to reach it, so that one can measure its speed.

The ALICE Time-Of-Flight (TOF) detector at LHC is based on the Multigap Resistive Plate Chambers (MRPCs). It is located at about 3.7 m from the interaction point and includes a cylindrical array (∼ 141 m2 of active area) the central region (−0.9 < η < 0.9). The TOF provides charged-particle PID in the intermediate momentum range and  also trigger for cosmic ray events and ultraperipheral collisions.

The Multigap Resistive Plate Chamber (MRPC) strip detector is the basic unit of the ALICE TOF detector, with a 120 × 7.4 cm2 active area. The ALICE TOF array consists of 1593 MRPC strips, subdivided into 18 azimuthal sectors. To guarantee low detector occupancy even in the highest charged-particle-density scenario each MRPC strip is segmented into two rows of 48 pickup pads of 3.5 × 2.5 cm2 , for a total of 96 pads for each strip and 152928 total readout channels. The TOF MRPC is based on a double-stack design: it is made of two stacks of five gas gaps. The resistive plates are made with commercially available soda-lime glass sheets. The gap (250 µm) is realised by commercial fishing line stretched across the glass sheets. In a beam test setup the average MRPC time resolution, including the contributions of the complete front-end and readout electronics, was measured to be better than 50 ps.

In a beam test setup the average MRPC time resolution, including the contributions of the complete front-end and readout electronics, was measured to be better than 50 ps. ") the following "The TOF was operated during LHC RUN1 with a resolution of 80 ps. Using then an improved calibration based on Pb-Pb 2015 data a similar resolution (56 ps) to the one obtained on test beam was eventually reached.

First TOF supermodule was put into operations in the ALICE cavern during Summer 2006. The last supermodule entered the cavern in April 2008. During LHC long shutdown 2 as part of the upgrade programme the readout card in each crate was replaced with a new one, designed to allow the operations of the detector in continuous readout.