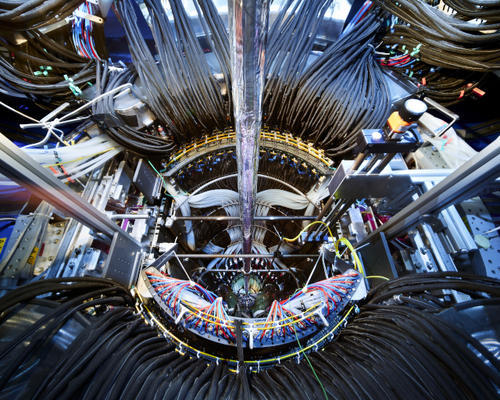 After two nerve-wracking months dedicated to the installation of the ALICE detector’s new Inner Tracking System (ITS), Corrado Gargiulo’s mechanical engineering team, in charge of the installation, can relax: the delicate procedure has been successfully completed and ALICE’s innermost subdetector is poised to collect its first data in the coming weeks.

With its 10 m2 of active silicon area and nearly 13 billion pixels, the new ITS is the largest pixel detector ever built. The detector lies sandwiched between the beam pipe and the Time Projection Chamber, which was installed in 2020, deep in the ALICE detector. By reconstructing primary and secondary particle vertices and improving the momentum and angle resolution for particles reconstructed by the Time Projection Chamber, the ITS is instrumental in identifying the particles born out of the powerful lead–lead collisions in the core of the ALICE detector.

The upgrade of the ITS will significantly increase the resolution of the vertex reconstruction, making the subdetector fit for future runs with higher luminosity, as part of a comprehensive overhaul of ALICE’s subdetectors striving for this very objective. The current upgrade relies on new pixel sensors called ALPIDE, which also make up the new Muon Forward Tracker (MFT), installed a few months ago. Each of those chips contains more than half a million pixels in an area of 15 × 30 mm2 and features an impressive resolution of about 5 μm in both directions – the secret to the subdetector’s improved performances. They are organised in seven layers, the innermost three forming the inner barrel, while the outermost four make up the outer barrel. The collected data is then transmitted with a bit rate of up to 1.2 Gb/s to a system of about 200 readout boards located 7 m away from the detector. The data is then aggregated and eventually sent to ALICE’s computing farm, where it is sequenced and processed.

The insertion of the heart of the ALICE detector around its beam pipe required surgical-like precision. The installation unfolded in two stages, as the two barrels making up the ITS had to be lowered separately, two months apart. The outer barrel got the ball rolling: it was loaded onto a truck in March and transported from Meyrin to Point 2, where the mating of its two halves and its insertion in the detector were carried out smoothly.

But the outer barrel was the easy part, at least compared to its inner counterpart whose insertion was complicated by its position right by the beam pipe. Luckily, weeks of rehearsals and careful alignment studies using metrological surveys proved their worth, and after an intense week of insertion and mating of the component’s two halves, which involved a few late-evening sessions for the experts, the delicate manoeuvre was completed in the late evening of 12 May. Preliminary tests showed no damage occurred during the installation, proving that the teams’ hard work paid off. The ITS is now fully ready for stand-alone tests with cosmic rays, in view of joining the MFT for a common commissioning phase. The final steps before taking data at the LHC are the installation scheduled for next month of the Fast Interaction Trigger, the last of the ALICE subdetectors that has yet to join this formidable machine, and an overarching commissioning phase starting in July. With the milestone of the ITS installation now behind them, the ALICE collaboration is looking ahead to Run 3 with growing confidence and excitement.