The ALICE Collaboration reports a wide range of new physics results at the International Conference of High Energy Physics (ICHEP2022) this week (6-13 July 2022). The status of the upgraded detector commissioning for the LHC Run 3, prospects for further upgrades for Run 4, and the completely new heavy-ion detector ALICE 3 for Run 5 and beyond are also presented. The ALICE Collaboration participates in ICHEP2022 with 1 plenary, 39 parallel and 13 poster presenters. The plenary presentation on Monday 11 July reports the highlights of new ALICE measurements and the status of the experiment. A selection of these topics is presented in the following sections.

The LHC Run 3 has started for ALICE! 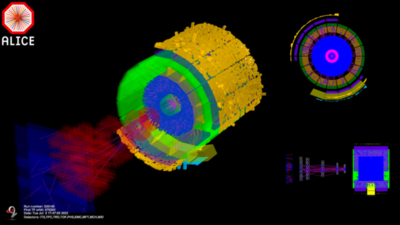 ALICE event display from the first day of proton-proton collisions at a centre-of-mass energy of 13.6 TeV in Run 3 (5 July 2022). This display shows space points, tracks and calorimeter clusters from a time frame of 12.5 ms, which includes about one hundred pp collisions.

The ALICE detector has undergone a major upgrade during the LHC long shutdown 2. New inner trackers, instrumented with monolithic active pixel detectors with a spatial resolution of about 5 microns, were installed in the central-rapidity barrel and forward muon-spectrometer acceptances.  The new GEM-based readout planes of the time projection chamber, the new fast trigger detector, the readout upgrade of several other detector components, and an integrated online-offline processing system, will enable recording Pb-Pb collisions at an interaction rate of up to 50 kHz. The upgraded apparatus was commissioned with cosmic-ray muons and, in October 2021 and May-June 2022, with proton-proton collisions at the LHC injection centre-of-mass energy of 900 GeV. A number of benchmark analyses of the new data were carried out in order to fully validate the new hardware, online and offline processing software, as well as a redesigned analysis framework that meets the larger data-throughput requirements of Run 3. The benchmark analyses included measurement of the charged-particle multiplicity distribution as a function of pseudorapidity, the momentum and angular correlations functions of charged particles and identified protons, as well as the reconstruction of strange hadron weak decays. ALICE has started Run 3 with pp data-taking at the unprecedented centre-of-mass energy of 13.6 TeV from 5 July and looks forward to lead-lead collisions in November 2022! 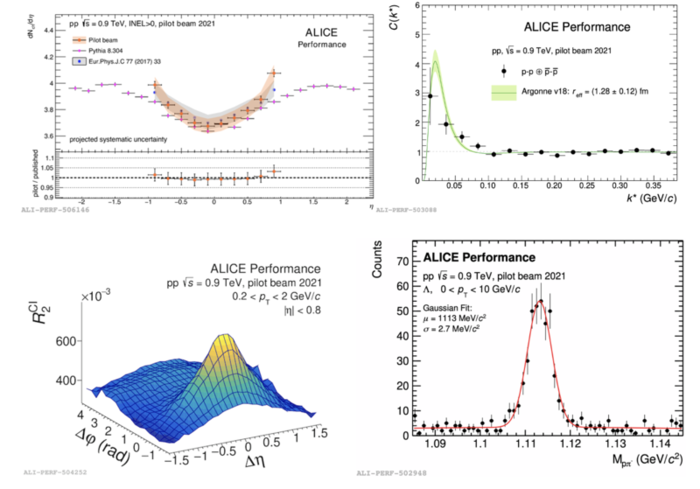 First direct observation of the dead-cone effect in QCD

The QCD dead cone, an angular region of suppressed gluon bremsstrahlung surrounding an emitting heavy quark, is directly revealed for the first time in pp collisions using D0-meson tagged jets. The dead-cone effect is responsible for mass-related differences in the shower of light and heavy quarks in both vacuum and the quark-gluon plasma environments. The above figure shows that a charm quark (c) in a parton shower loses energy by emitting radiation in the form of gluons (g). The shower displays a “dead cone” of suppressed radiation around the quark for angles (θ) smaller than the ratio of the quark’s mass (m) and energy (E), which decreases at each stage of the shower. The changing colour of the quark illustrates its changing “colour charge”. Jets initiated by a scattered charm quark are tagged via the presence of a fully reconstructed D0 meson amongst their constituents. Jet declustering tools allow for the sequential reconstruction of the charm quark shower, giving access to the dynamically evolving emission kinematics. In this way, the angular distribution of gluon emissions can be compared for charm-initiated and inclusive jets, revealing a suppression of small-angle emissions in the charm sector. This suppression increases with decreasing charm quark energy, which is probed down to 5 GeV with the ALICE detector. The measured mass and energy dependence of the dead-cone effect follow parametric expectations from theory and are well described by MC generators. 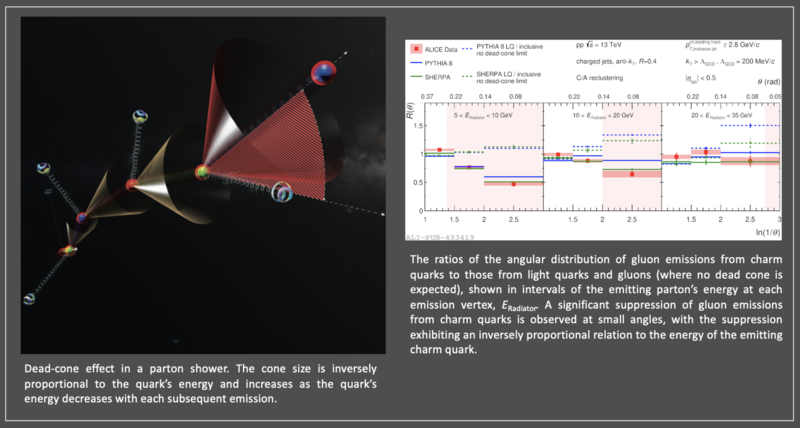 Charmonia in the quark-gluon plasma: varying the binding energy

Charmonia, bound states of charm and anti-charm quarks, can be considered as unique probes of the deconfinement in the QGP. The charm-anticharm quark pairs are produced early in the heavy-ion collisions, but their binding into final-state particles is a longer process. In the presence of the strongly-interacting QGP medium, the binding is screened by the color charge of the deconfined quarks and gluons and the charmonia production is suppressed. The level of suppression depends on the charmonia binding energy and the QGP temperature. At LHC energies there is a counterbalancing process. The initially-produced charm and anticharm quarks interact with the QGP constituents, reaching close to thermalization, and further on can recombine into charmonium bound states. The recombination process is dependent on the size of the charmonia and the degree of thermalization of charm quarks. Therefore, the comparison of the production of different charmonium states can bring essential information on the properties of the QGP. The ψ(2S) charmonium state has ten-times smaller binding energy and twice larger size compared to the commonly-studied J/ψ state. Its experimental study is more difficult because of the much lower probabilities for both production and decay to a muon pair. ALICE reports the first measurement on the ψ(2S) charmonium state in Pb-Pb collisions down to zero transverse momentum. The results show a suppression about twice as large as for J/ψ. Theoretical predictions that include suppression and recombination of charmonia in the QGP describe the measurement.

Looking for the lost jets

Jets are sprays of collimated hadrons that result from the fragmentation of energetic quarks or gluons produced in hard scattering processes. In presence of a quark-gluon plasma (QGP) the interaction of the quarks and gluons as they traverse this medium causes jet quenching: the measured yields of energetic jets are reduced with respect to the expectation from proton-proton collisions. A possible explanation for jet quenching is additional medium-induced radiation of gluons at large angles with respect to the jet direction. As a consequence, the jet would be found by experimental algorithms with an energy much lower than its initial energy. ALICE uses a technique called hadron-jet recoil to search for these quenched jets. The yield of jets that are produced as a back-to-back pair (recoil) with an energetic hadron, called trigger hadron, is compared in nucleus-nucleus (AA) and proton-proton collisions by means of the IAA ratio. The yields of recoil jets are reduced by jet quenching when the energy of the jet is similar to that of the trigger hadron (IAA < 1). This effect is reproduced by jet quenching models (JETSCAPE in the figure). A new preliminary measurement extends for the first time the study to recoil jets with very small energy and shows a hint of increased jet yields (IAA > 1). The result opens the possibility to characterize jets that have undergone large energy loss in QGP. 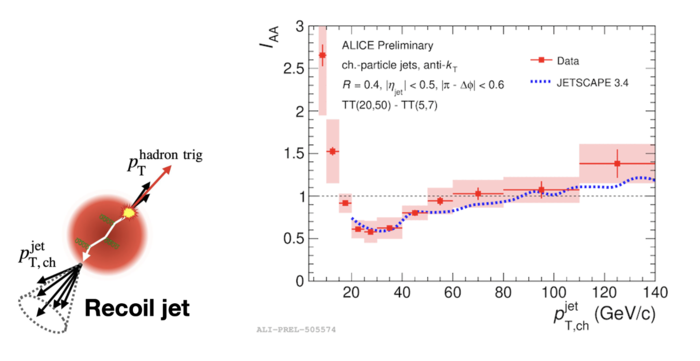 Schematic representation of the measurement of a jet recoiling against a trigger hadron. Ratio IAA of the recoiling jet yields in nucleus-nucleus (‘AA’) and in pp collisions, compared to the JETSCAPE jet quenching simulation.

A fundamental open question in particle physics concerns how hadrons are formed from quarks, especially in the quark-gluon plasma produced in nucleus-nucleus collisions. Open heavy-flavour production offers unique insights into the nature of the QGP medium and its hadronisation, in particular through the measurement of the baryon-to-meson production ratio. A significant enhancement of the Λc+/D0 ratio in heavy-ion collisions is predicted by theoretical models that include modified hadronisation mechanisms with respect to pp collisions, such as statistical hadronisation of thermalised charm quarks or coalescence of charm quarks with light quarks from the QGP. The production of prompt Λc+ baryons was measured with the ALICE detector in Pb-Pb collisions at 5.02 TeV, as well as the Λc+/D0  ratio and nuclear modification factor. The measured Λc+/D0 ratio increases from pp to central Pb-Pb collisions at intermediate transverse momentum pT. These results were compared with predictions from different theoretical models, and place significant constraints on charm-quark hadronisation. The upgraded ALICE detector for the LHC Runs 3 and 4 will increase the integrated luminosity by a factor of about 50 and the tracking precision by a factor 3-6, meaning future measurements of Λc+-baryon production will allow for even stronger constraints on the heavy-quark hadronisation mechanisms in heavy-ion collisions. 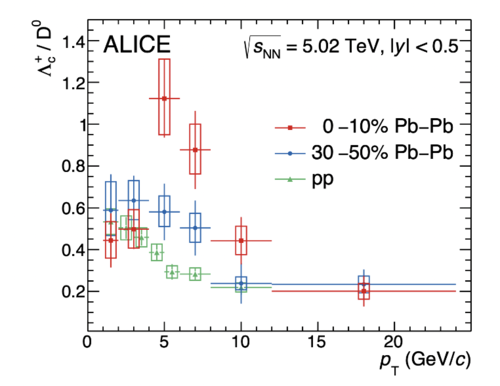 The Λc+/D0 ratio as a function of transverse momentum in pp and Pb-Pb collisions. The Λc+ is a baryon (three quark state) and its production at low and intermediate momenta is found to be enhanced with respect to the D0-meson (two quark state).

Small but flowing: hadron-dependent anisotropy in pp and p-Pb collisions

The plasma of quark and gluons (QGP) formed in ultra-relativistic collisions of heavy nuclei behaves as an almost perfect liquid. The hydrodynamic nature of the QGP medium results in the observed flow of the produced particles. There are two types of particle flow, the radial flow and the anisotropic flow. The radial flow is related to the common velocity field of the expanding QGP. The pressure gradients inside QGP transform the spatial anisotropies of the overlap area of the colliding nuclei into anisotropic flow. At low particle momenta, the anisotropic flow shows a characteristic particle-mass ordering. At higher momenta, the baryon particles composed of three quarks have about 50% higher flow with respect to the meson particles composed of quark-antiquark. This indicates that the flow arises already at the level of quarks, usually referred to as partonic flow, and that the hadron production at higher momenta is dominated by a quark coalescence.

Although initially unexpected, the particle flow has been also observed in small collision systems like proton-proton and proton-lead. Its origin is not yet fully clarified. Recent precise flow measurements of various hadron species by ALICE clearly indicate mass ordering at low momenta and baryon-meson splitting at higher momenta, thus bringing more similarities between the flow patterns measured in small and large collision systems.

Accessing the residual strong force between charm and non-charm hadrons

Besides gravitation, electromagnetism, and the weak force, the strong force is one of the four fundamental forces of nature. It acts between quarks and binds them together in hadrons such as protons and neutrons. The residual force that attracts quarks of two separate hadrons is responsible for the binding of protons and neutrons to larger nuclei. While this residual strong force is well studied for hadrons that consist of up, down, and strange quarks, it has never been measured for those containing charm quarks. In ALICE, a special two-particle correlation technique called femtoscopy has been employed, which allows one to probe its strength. By looking at the distribution of the relative momentum difference of charged D meson (a charm quark bound to a down antiquark) and protons (two up quarks and one down quark), we can investigate if these particles rather attract each other or repel. While this force is strongly attractive between protons and neutrons, we have hints that D mesons are repelled from pions and attracted to protons.

Two-particle correlation function of D mesons with pions, compared to the expected Coulomb interaction and a fit that includes the residual strong interaction.