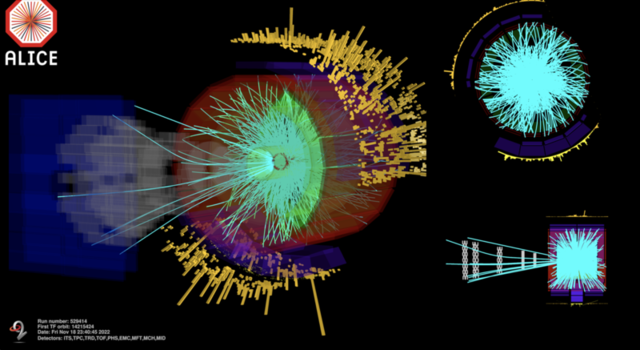 After the successful start of Run 3 in July this year with proton-proton collisions at the record energy of 13.6 TeV, lead nuclei to circulate again on Friday 18 November 2022 at the Large Hadron Collider (LHC) for a short test run after a gap of four years.

Lead nuclei comprise 208 nucleons (protons and neutrons) and are used at the LHC to study the quark-gluon plasma (QGP), a state of matter in which the elementary constituents, quarks, and gluons, are not confined within nucleons but can move and interact over a much larger volume.

Since the start of Run 3, proton-proton collisions were recorded and processed by ALICE for several months, but this test with lead beams is important to prepare and optimize the data processing and compression for collisions with thousands of particles simultaneously produced.