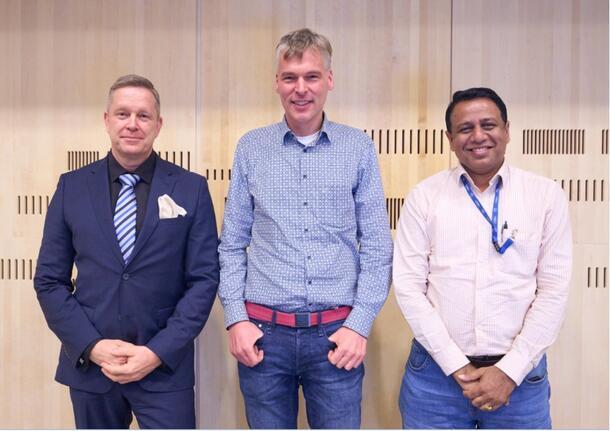 Marco van Leeuwen of NIKHEF, the Netherlands has taken over as the ALICE Spokesperson from Luciano Musa from the beginning of January for three years. The new Management team includes Deputy Spokespersons, Kai Schweda of GSI, Darmstadt, Germany, and Bedangadas Mohanty of NISER, Bhubaneswar, India. Marco highlights three key challenges for the collaboration during his term as spokesperson: the efficient operation of the detector during LHC Run 3, data analysis and the production of new scientific results, and the preparation of detector upgrades for Run 4 and Run 5.

Marco van Leeuwen (ALICE Spokesperson, 2023-2025): Marco’s research focuses on the strong interaction and the formation of quark-gluon plasma (QGP) in high-energy heavy-ion collisions. He received his Ph.D. at Nikhef and Utrecht University, working on the measurement of kaon production and search for open charm in the NA49 experiment at the SPS. He was a postdoctoral fellow at Lawrence Berkeley National Laboratory working in the STAR experiment at the Relativistic Heavy-Ion Collider where he worked on high transverse momentum (pT) physics and the study of parton energy loss in the QGP. During this time, he contributed to the proposal for the electromagnetic calorimeter (EMCal) in ALICE. He moved back to the Netherlands in 2007 and has been working on the ALICE experiment since then, with a focus on jets and high-pT physics at the LHC. He has been awarded the  NWO Vici research grant in 2018. He has played a leading role in the ALICE FoCal upgrade project which will be used to probe the low-x structure of the nucleus with direct photon production. Marco served as ALICE physics coordinator from 2017 to 2019 and as upgrade coordinator from 2020 to 2022.

Kai Schweda (ALICE Deputy Spokesperson, 2023-2025): Kai Schweda is a senior scientist at the GSI Helmholtz Centre in Darmstadt, Germany, and an associate professor at the Department of Physics and Astronomy at the University of Heidelberg. He studied physics at the Technische Hochschule Darmstadt (now Technical University of Darmstadt) and received a diploma (master’s equivalent) and a doctorate with a thesis in nuclear structure at the Superconducting Linear Accelerator S-DALINAC and the National Accelerator Centre, Faure (now iThemba LABS), South Africa. In 2000, he joined the STAR Collaboration at the Relativistic Heavy-Ion Collider as a postdoc within the Nuclear Science Division of the Lawrence Berkeley National Laboratory, CA, USA. He made substantial contributions to the design of the STAR Heavy-Flavor Tracker, a highly granular silicon pixel detector based on CMOS monolithic active pixel sensors. In 2005, he joined the ALICE Collaboration as a Helmholtz Young Investigator at the University of Heidelberg. He led the implementation of the detector control system for the ALICE Transition Radiation detector (TRD) and developed its fast trigger detector. He made major contributions to the construction of the high voltage systems of the ALICE gaseous detectors, TRD and TPC. He held leading roles in these two detector projects including the offline coordinator of TPC for more than eight years. He was the Chair of the ALICE Service Work Board for last three years.

Bedangadas Mohanty (ALICE Deputy Spokesperson, 2023-2025): Bedangadas Mohanty is a professor of physics at the National Institute of Science Education and Research, India. His PhD research was carried out in the WA98 experiment at CERN-SPS on a search for disoriented chiral condensates in heavy-ion collisions. He did his postdoctoral work at Lawrence Berkeley National Laboratory in the STAR experiment at BNL, where he subsequently became the physics analysis coordinator and then the deputy spokesperson of the experiment. His primary physics interest in STAR is the search for the QCD critical point in the phase diagram of the strong interaction. He has been the spokesperson for the Indian groups working in the ALICE experiment for the period 2021-2022. He has also served the ALICE collaboration as an Editorial Board and Conference Committee member and was scientific associate at CERN during 2019-2020. His first major contribution to ALICE started in 1999 through the technical design report of the Photon Multiplicity Detector from India. His group is currently contributing towards the Forward Calorimeter upgrade program.  His recent primary physics interest in ALICE has been studying various aspects of resonance production in high-energy collisions. He is an elected fellow of all the Indian Science Academies, and American Physical Society, and a J C Bose National Fellow.