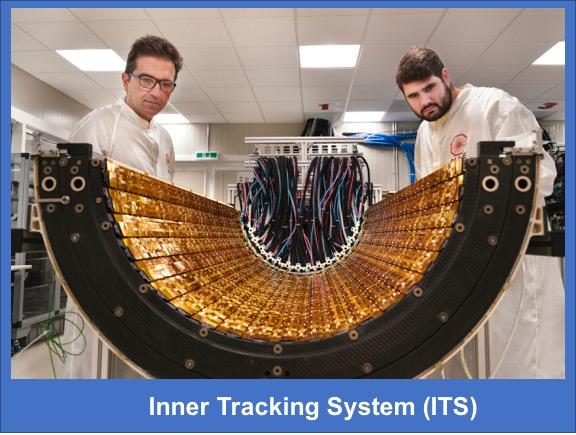 The Inner Tracking System (ITS) is the central most detector surrounding the beampipe located in the central barrel of ALICE. The basic functions of the ITS are:

The ITS will be replaced in 2021 by a new detector, based on monolithic active pixel sensors (MAPS) with a granularity of 30 x 30 micrometer, implemented in a CMOS imaging technology (similar to digital camera sensors). The new detector consists of 7 layers, making it possible to reconstruct tracks based on ITS information alone. With an active area of 10 m2, segmented in 12.5 billion pixels, it represents the largest scale application of MAPS in a high-energy physics experiment. In the MAPS technology, both the sensor collecting the charge signal and the readout circuit are hosted in the same substrate of silicon. The chip developed by ALICE, called ALPIDE, makes use of a 180nm CMOS process provided by Towerjazz. The sensors are thinned down to 50-100 micrometers, thus the silicon material budget per layer is significantly reduced compared to the previous ITS. Each ALPIDE chip covers an area of 15x30 mm2 and contains more than half a million pixels. The performances achieved for power consumption (<40 mW/cm2) and spatial resolution (~5 micrometer) satisfy and even exceed the requirements for the ALICE ITS.

Given their small area the ALPIDE chips need to be tiled up in staves to cover the full surface of the ITS. Staves are assembled on cylindrical supports placed at different radial distances from the interaction point (IP) (22mm to 400mm). The beam pipe is also newly designed with a smaller outer radius of 19 mm. The brand-new ITS detector will improve the impact parameter resolution by a factor of three in the transverse plane and by a factor of five along the beam axis. It will extend the tracking capabilities to much lower pT, allowing ALICE to perform measurements of heavy-flavour hadrons with unprecedented precision and down to zero pT.