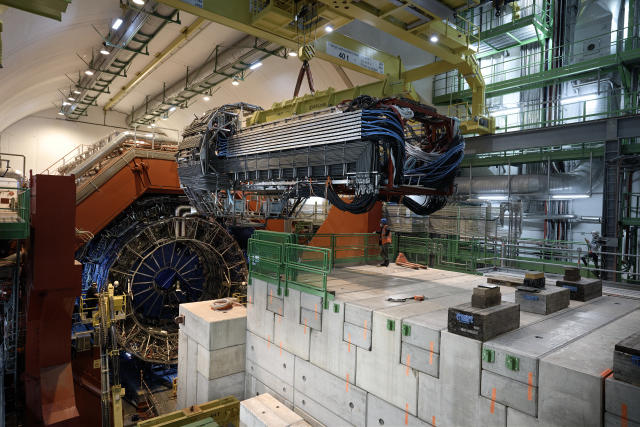 On display in this picture is the ALICE Miniframe in the process of being reinstalled on the detector in mid-November 2020, after a two years long trip to the surface during which the services it carries were upgraded.

With its 14 tons and length of 12 meters, the Miniframe is anything but “mini”: it is a giant “plug”, a large metallic support structure, installed in front of the A-side of the ALICE Time Projection Chamber (TPC), and sitting partially in the L3 magnet. It has supported ALICE’s systems since the detector’s debuts, carrying the services for the TPC and ITS (Inner Tracking System), such as power supply, cooling, gas, detector control, detector safety, trigger, and data acquisition. It also houses the ALICE forward detectors, FIT-A (Fast Interaction Trigger A), the ALICE RB24 beampipe, and the compensator magnet. The Miniframe was designed to be easily removable to facilitate a possible extraction of the TPC during Long Shutdown periods.

This came in handy during the LS2, as the TPC was temporarily removed from the cavern to receive upgrades. In January 2019, the Miniframe was brought to the SX2 surface hall, where it received new services and patch panels for the new ALICE tracker, the ITS2, including kilometres of new cables for the ITS2 and TPC. The support structures and cable trays were re-engineered to accommodate the cables, among which the 7'000 optical fibres needed to continuously read out the TPC and ITS2.

The upgrades were completed just in time for the reinstallation in November 2020, when the fully refurbished Miniframe was lowered back to the cavern and inserted on the detector. Since then, work continues to connect the services, in view of operating the TPC before the end of the year.