The ALICE Collaboration presents several new physics results at the 9th Large Hadron Collider Physics conference LHPC2021 this week, as well as the ongoing major detector upgrade for the LHC Run 3, prospects for further upgrades for Run 4, and for a completely new heavy-ion detector for Run 5 and beyond. The ALICE Collaboration participates in LHCP2021 with 5 plenary, 13 parallel and 17 poster presenters.

This first presentation by ALICE reports the Highlights and Perspectives. A selection of the main physics highlights is reported here. The detector upgrades and future prospects are described in this presentation: Upgrades for ALICE.

Reckoning all the charm at the LHC: new insights on charm hadronization (see also CERN news)

New ALICE preprints report measurements of charmed meson (quark-antiquark) and baryon (three quarks) production in proton-proton collisions at LHC Run 2 energies (D mesons, Λc, Ξc baryons at 5 TeV, D mesons, Λc, Σc, Ξc baryons at 13 TeV). For baryons like Ξc0 and Ξc+, that also contain a strange quark, and like Σc0,++, that rapidly decays to Λc+, these are the first production yield measurements at the LHC. The measurement of a comprehensive set of charmed hadrons enabled the determination of the total charm quark production cross section with unprecedented accuracy, as well as of the charm ‘fragmentation fractions’, that is, the probabilities of the various charmed hadrons to be formed (see preprint). 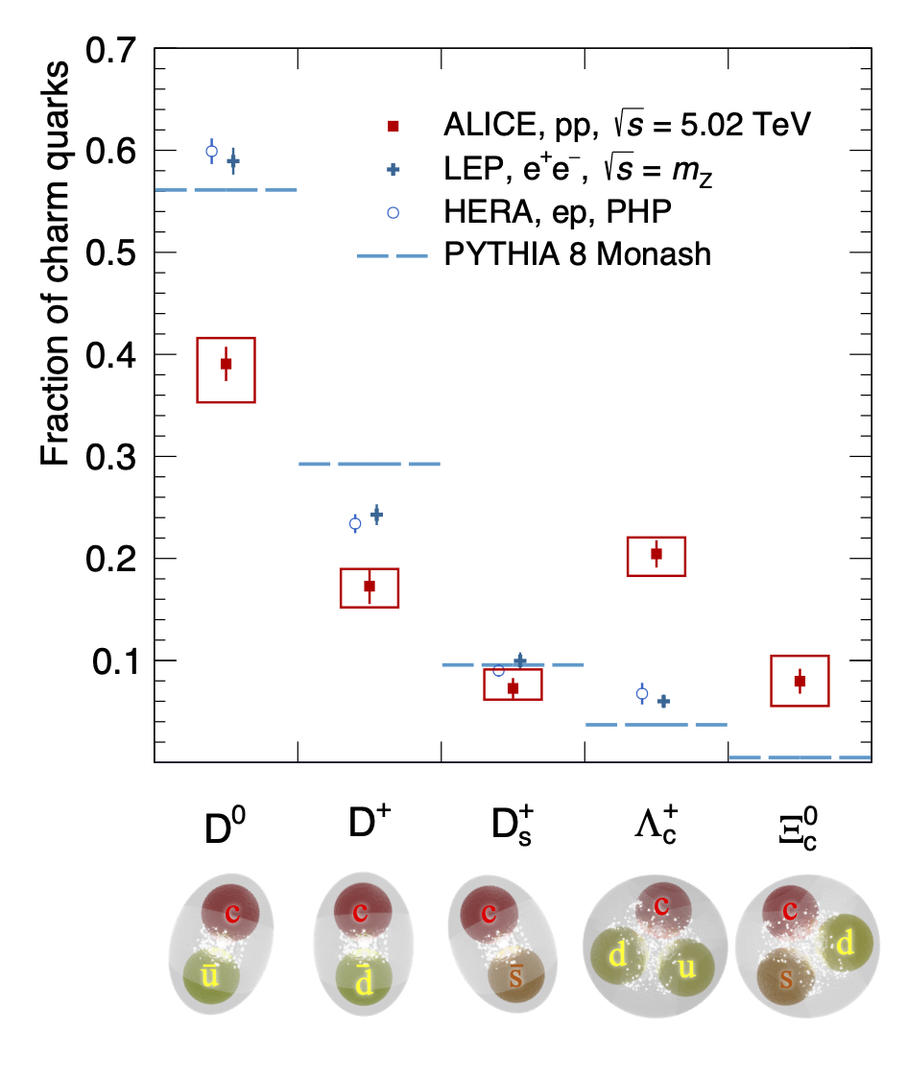 Charm quark fragmentation fractions into the most abundant charmed hadrons.

ALICE reports that these probabilities are not universal, that is independent of the collision system, as it was assumed for a long time: the observed charmed hadron distribution in proton-proton collisions is very different from previous measurements at electron-positron and electron-proton colliders. For example, the probability that the charmed baryon Λc is formed is about three times larger in proton-proton collisions. The ALICE measurements have stimulated an intense theoretical activity for their interpretation, mainly in terms of hadron formation mechanisms that take into account the surrounding environment of strongly-interacting particles. These explanations include strong-interaction charge (‘colour’) connections across the whole set of particles produced in the collision, as well as formation of hadrons by ‘coalescence’ of the charm quarks with other quarks or antiquarks created in the collision.

The observation of modified hadronisation probabilities for charm quarks follows similar ALICE measurements for hadrons containtaining only light quarks (up, down and strange). In these cases, increased production of baryons (hadrons with three quarks) with respect to mesons (quark-antiquark states) had been observed in proton-proton, proton-lead and lead-lead collisions, for hadrons with transverse momentum (pT) of a few GeV/c, with a pattern of baryon-over-meson ratios that increases as the multiplicity of particles produced in the collision increases. In a new preprint the production of strange neutral baryons (Λ) and mesons (K0s) is reported in two parts of the events separately: inside jets, that originate from the hadronisation of energetic quarks or gluons, and in the event portion perpendicular to a jet, where low energy processes are dominant. 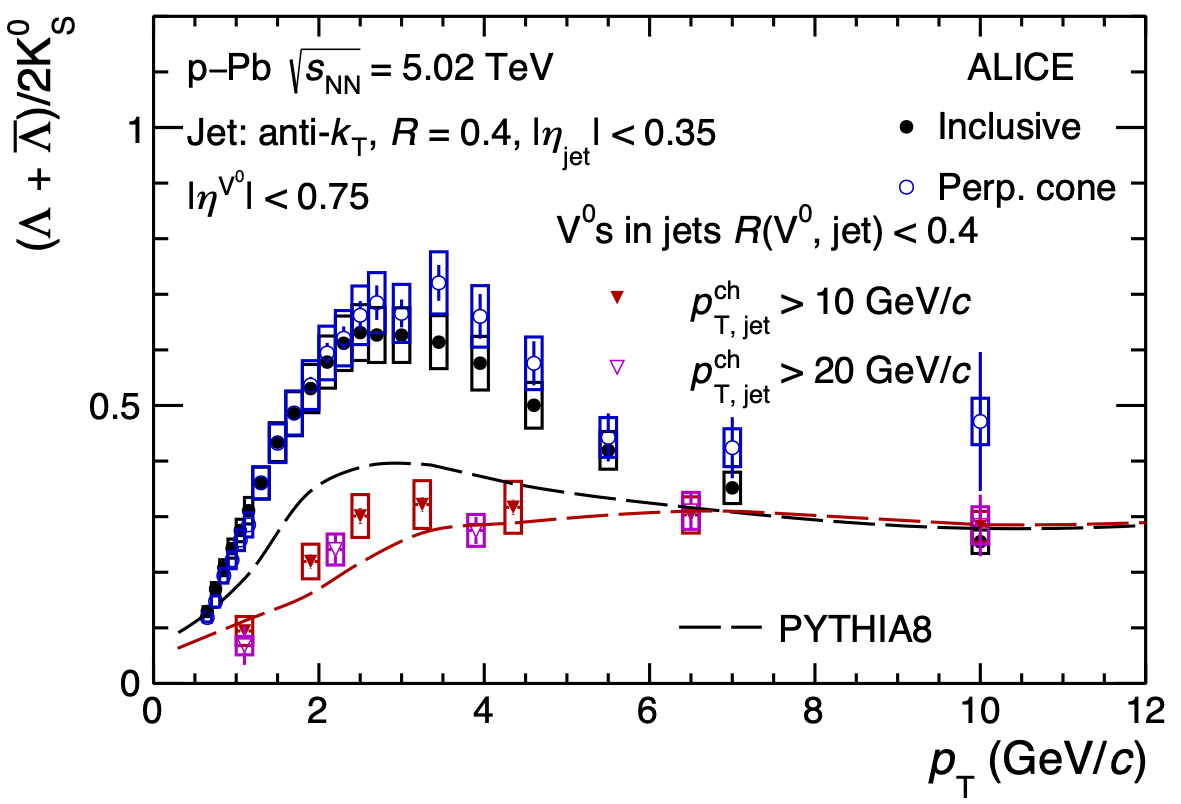 Strange baryon-over-meson ratio as a function of transverse momentum inside jets (red, magenta), outside jet (blue) and in the entire sample (inclusive).

Quark-gluon plasma and hadronization with charm, beauty and strange quarks

Heavy quarks (charm and beauty) also serve as probes of the quark-gluon plasma (QGP) formed in lead-lead collisions at the LHC. The QGP is a state of strongly-interacting matter characterised by the deconfinement of the colour charge, that is, colour charge carriers like quarks and gluons are not confined within colourless hadrons but move over distances of the order of the size of the lead nucleus. Charm and beauty quarks are, because of their large mass, produced before the QGP is formed and they subsequently interact with it. Measurements of hadrons with heavy quarks provide information both on the interaction within the QGP and on the process of hadronisation in presence of a high density of surrounding particles. 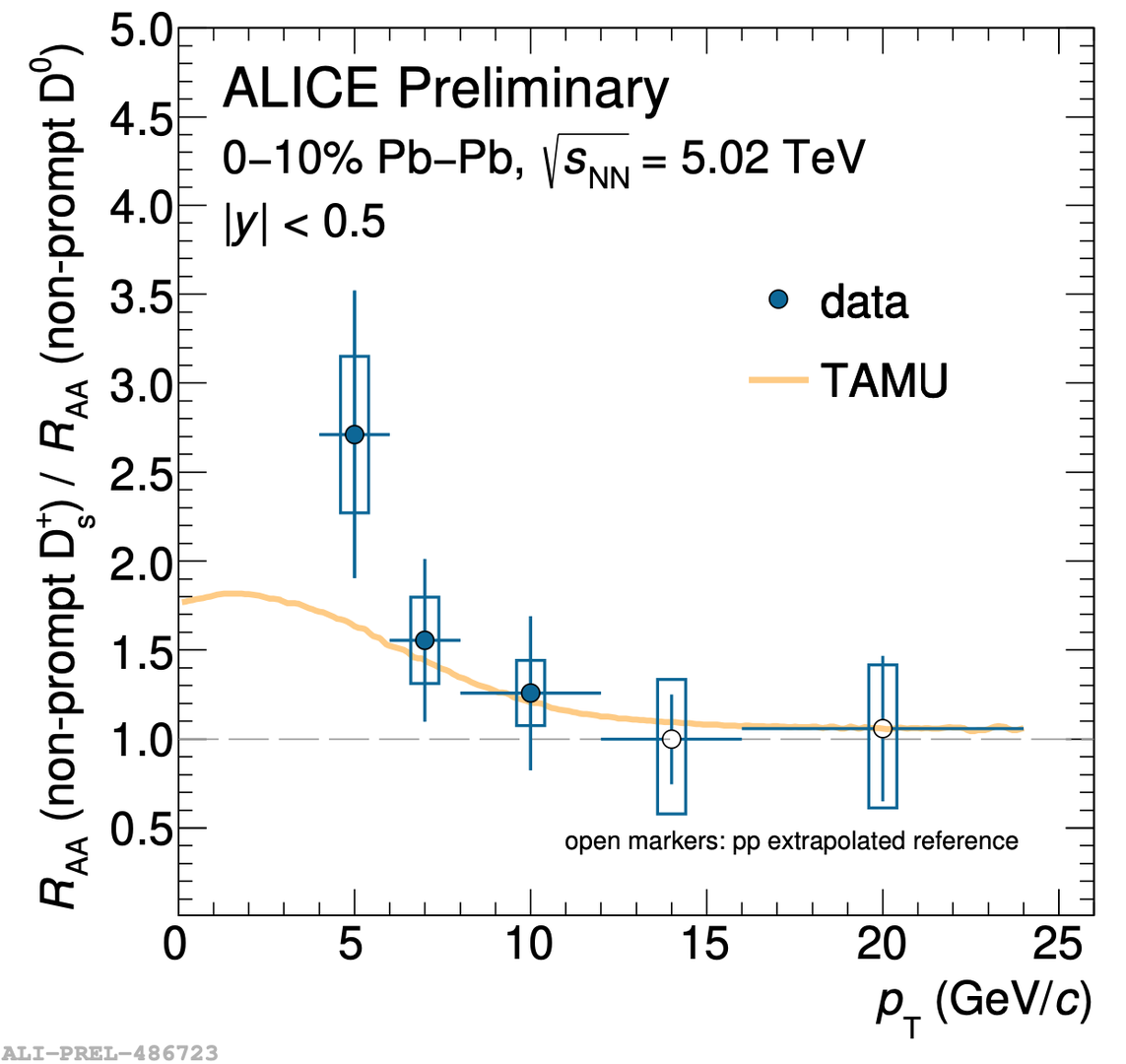 Comparison of the production of non-prompt Ds and non-prompt D0 mesons (a double ratio in lead-lead and proton-proton collisions is used to highlight differences due to quark content).

A new ALICE preliminary measurement uses machine learning techniques to discern the charm-strange mesons (Ds) that originate directly from hadronisation of charm quarks and those that originate from decays of beauty hadrons. The latter, denoted 'non-prompt' Ds mesons, are then compared to previous measurements of non-prompt D0 mesons to gain sensitivity to the production of beauty-strange mesons (Bs). The preliminary results show that the probability of forming beauty-strange mesons in lead-lead collisions tends to increase with respect to that of forming non-strange beauty mesons, although the data is not yet fully conclusive. The measurement is described by a theoretical model that includes hadronisation of beauty quarks by recombination with u, d, or s quarks from the QGP. Measurements with the upgraded ALICE detector during the upcoming Run 3 of the LHC will provide a firm conclusion on the matter.

New insights on jet propagation within the quark-gluon plasma

Along with heavy quarks, jets - the collimated sprays of hadrons that result from the fragmentation of energetic quarks or gluons - are among the principal probes of the quark-gluon plasma. Jet quenching in the quark-gluon plasma induces a large reduction of the measured jet yields in heavy-ion collisions, when compared with expectations from proton-proton collisions. The interaction processes that underlie jet quenching are a subject of intense experimental and theoretical study at the LHC. The modification of the internal structure of jets is one of the avenues that are explored to this purpose. 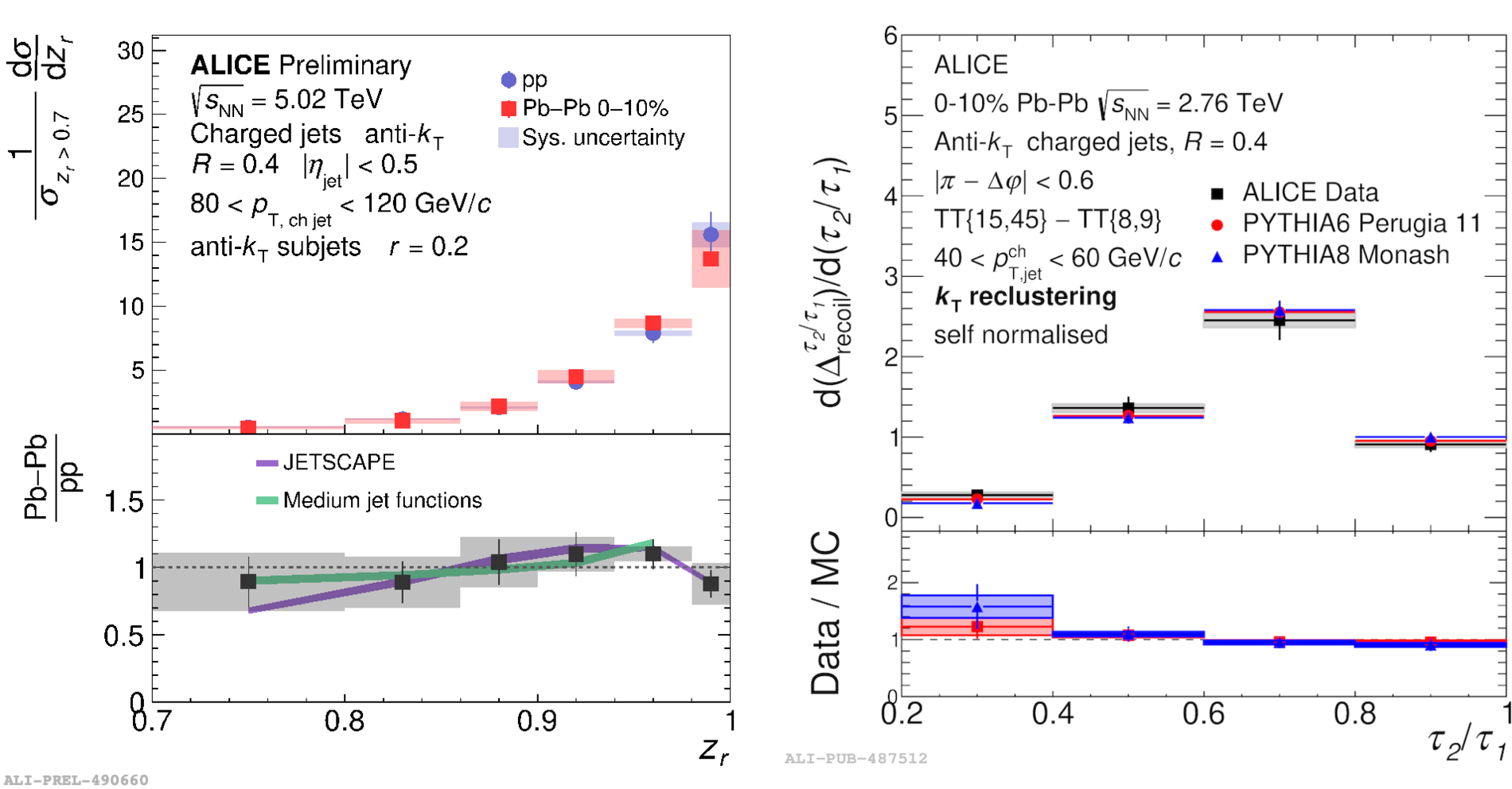 Leading subjet fragmentation (left) and the ratio of 2 and 1-subjettiness (right) in central Pb-Pb collisions compared to pp collisions.

The ALICE Collaboration has presented the measurement of two substructure observables, the N-subjettiness (see new preprint) and the leading subjet fragmentation zr (see new preliminary results), in central Pb-Pb collisions. The N-subjettiness, or more concretely, the ratio of 2 to 1-subjettiness, τ2/τ1, quantifies the fraction of jets characterized by a distinct two-prong structure, as opposed to single-core jets, which are the majority of the QCD jets. The zr observable measures the fraction of momentum of the jet carried by the most energetic subjet. Both observables exhibit a small change with respect to proton-proton collisions, suggesting that jet quenching does not strongly alter the subjetiness of the jet. These results, together with previous measurements of the groomed momentum fraction and radius, pose differential constraints to model calculations.

In order to study the (anti)proton-kaon interactions, the ALICE experiment employed a novel method which relies on the femtoscopy technique (the technique is called femtoscopy because it allows to investigate spatial scales close to 1 fm). The method consists of inferring the dynamics of the strong force between the particles by measuring the distribution of their relative momentum k* at given distances between them.