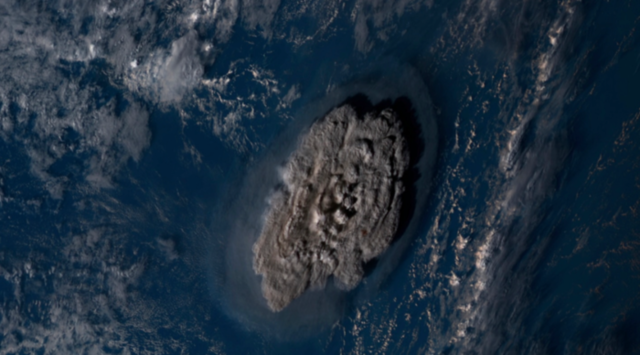 Hunga Tonga and Hunga Ha’apai are two twin volcanic islands in the Tonga Archipelago located in the South Pacific (20°32’45” S, 175°23’22” W). In 2009 an eruption made the two islands merge, but on January 15th, at 4:15 UTC, underwater volcano Hunga Tonga-Hunga Ha'apai generated a massive shock wave during a powerful eruption and separated the two islands again.

More than 15 hours later, the ALICE DCS sensors detected an anomalous oscillation in the atmospheric pressure, with an amplitude of 1.3 hPa, followed by several secondary waves. This event triggered alarms in several gas systems, including TPC and TRD, which struggled for hours to compensate for the perturbation.

A second oscillation was observed at 01:00 UTC on January 16th, and it is compatible with the hypothesis of the same wave coming from the volcano in the opposite direction over a distance of about 22885 km (estimating the average Earth circumference to 40035 km), and traveling for 20:45 hours at an average speed of 306 m/s.