The ALICE Collaboration reports a wide range of new physics results at the International Conference on Strangeness in Quark Matter (SQM2022) this week (13-17 June 2022). The scope of the conference includes strangeness and heavy-flavour production, as well as correlations and fluctuations, as tools to study the quark-gluon plasma and the strong interaction in nuclei and in compact stars. The ALICE Collaboration participates in SQM2022 with 2 plenary, 26 parallel and 9 poster presenters. The plenary presentations on strangeness and correlations and on heavy flavour report the highlights of new ALICE measurements. A selection of physics results is presented in the following sections. 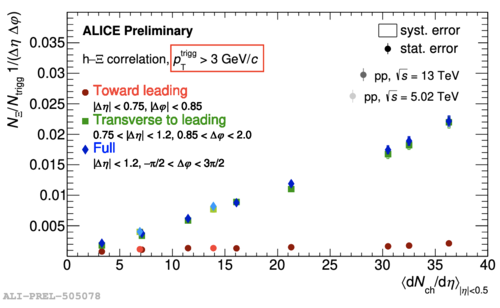 Number of double-strange 𝚵-baryons produced either transverse (green) or towards (red) the leading particle as a function of charged particle density at midrapidity.

In hadron-hadron collisions, the composite structure of the incoming hadrons implies the possibility that multiple pairs of partons - quarks or gluons - undergo simultaneous independent scatterings usually referred to as ‘multiple parton interactions’ (MPI). The bulk of the MPI is much softer than the primary hardest parton-parton scattering and contributes significantly to the underlying event (UE) activity. Furthermore, several models implement a geometrical picture of the hadron-hadron collisions in which the number of generated MPI is driven by the impact parameter of the collision. ALICE has measured the particle production in proton-proton and proton-Pb collisions as a function of the UE activity and the energy deposited by the beam remnants at very forward rapidity in the Zero-Degree Calorimeters (ZDC). The UE activity is calculated by counting particles not belonging to the primary parton-parton scattering and thus emitted in the transverse region with respect to the leading  - highest transverse-momentum - particle. A clear correlation between the UE at midrapidity and the energy detected by the ZDC is observed, corroborating the geometrical picture of the initial collision stages. The distribution of the UE activity at various proton-proton collision energies and its dependence on the transverse momentum of the leading particle further support the primordial role of the MPI. The techniques developed to characterise the UE have been also used to study the jets originating from the primary parton-parton scattering. Unlike Pb-Pb collisions, where the parton energy loss inside the created quark-gluon plasma leads to jet quenching, no signs of such an effect are found in proton-proton and proton-Pb collisions. 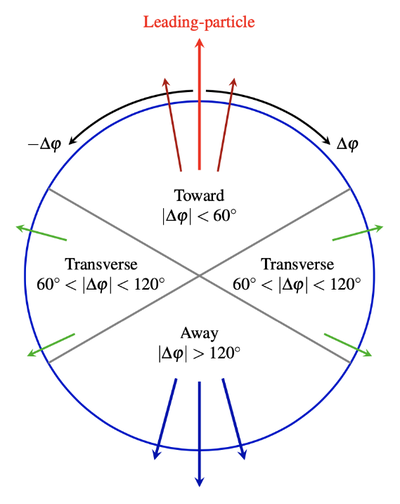 Illustration of the toward, away and transverse azimuthal regions with respect to the leading particle direction.

The antimatter-to-matter asymmetry in the little bang

The Universe contains only 5.4x10-10 baryons per photon. This ratio is so small, because almost all the matter particles annihilated with antimatter particles a few instants after the Big Bang. Pb-Pb collisions at the LHC create conditions similar to those of the early Universe. In such collisions, however, a much larger excess of matter with respect to antimatter is observed, because the initially-colliding nuclei are made of matter particles. ALICE measurements show about 1% more protons than antiprotons and about 6% more 3He nuclei (a bound state of two protons and a neutron) than anti-3He nuclei. Nevertheless, this shows that at the LHC we are much closer to recreating the conditions of the early Universe than at any other particle accelerator. In order to interpret all the measured antiparticle-to-particle ratios simultaneously, a thermodynamic description of the fireball produced in the collision is used. This thermal-statistical model is based on two free parameters: the temperature and the baryochemical potential that describes the additional energy needed to add a baryon with respect to an antibaryon to the system. While the temperature has been well constrained from the measurement of various particle species over the recent years, a new ALICE measurement improves the precision on the baryochemical potential by almost an order of magnitude. 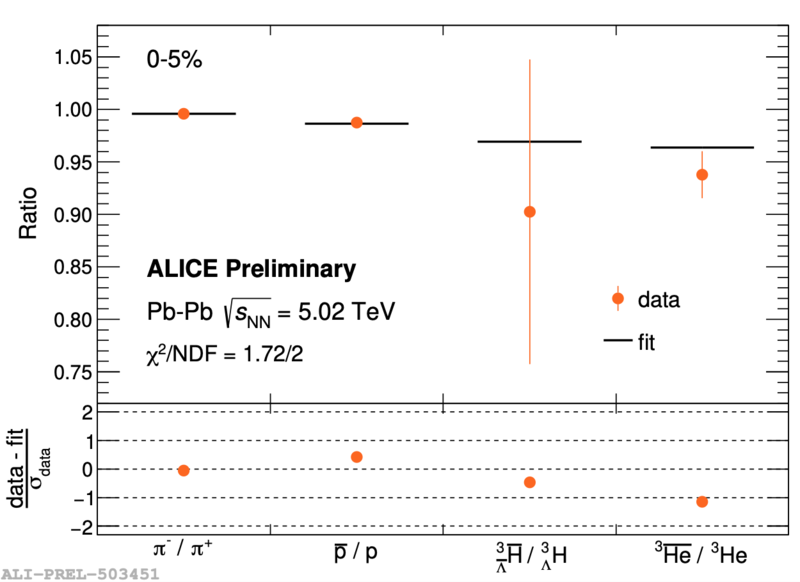 Antiparticle-to-particle ratios in Pb-Pb collisions (three centrality classes shown). The fits with the black lines are used to estimate the baryochemical potential of the system.

Towards characterising the QGP phase transition with net-proton fluctuations

Heavy-ion collisions at high energies such as those available at the LHC provide the conditions for the phase transition from ordinary nuclear (hadronic) matter to the quark-gluon plasma (QGP). Phase transitions can be studied by investigating the response of the system to external perturbations through measurements of statistical fluctuations in the very large sample of heavy-ion collisions (“events”) that are recorded in experiments. In particular, fluctuations of conserved quantum numbers, like electric charge and baryon number, can provide information on the phase boundary between QGP and hadronic matter. Moreover, they can be compared with the theoretical predictions from quantum chromodynamics (QCD). A new ALICE article reports the first measurement of the third-order moment of the event-by-event distribution of net-protons (number of protons minus number of antiprotons) in LHC Pb-Pb collisions. The third-order moments are consistent within uncertainties of a few percent with the null value predicted by QCD calculations on the lattice. The second-order moments (not shown) deviate from purely-statistical fluctuations, indicating the presence of long-range rapidity correlations between protons and antiprotons originating from the early phase of the collision. The HIJING and EPOS event generators, which do not incorporate the concept of phase transition, fail to describe the data for both the second- and third-order moments.

Ratio of third and second order moments of the net-proton event-by-event distribution in Pb-Pb collisions as a function of centrality, compared with predictions of the HIJING and EPOS event generators and with the null baseline expected on the basis of lattice QCD calculations.

Beyond the average: higher moments of the antideuteron multiplicity distribution

Despite two decades of extensive studies, the production of antinuclei in heavy-ion collisions is not fully understood. Conceptually-different theoretical models give very similar predictions for the production yields of, for example, deuteron antinuclei (bound states of an antiproton and an antineutron). This calls for new experimental observables that can discern among production models. The first measurement of event-by-event antideuteron number fluctuations in high-energy heavy-ion collisions is reported in a new ALICE article. The results are compared with existing coalescence calculations, which fail to describe the measurement. Thermal-statistical model calculations describe the measurements only for correlation volumes that are different with respect to those describing proton yields and a similar measurement of net-proton number fluctuations. The results present a severe challenge to the current understanding of nuclei production in heavy-ion collisions at the LHC energies. 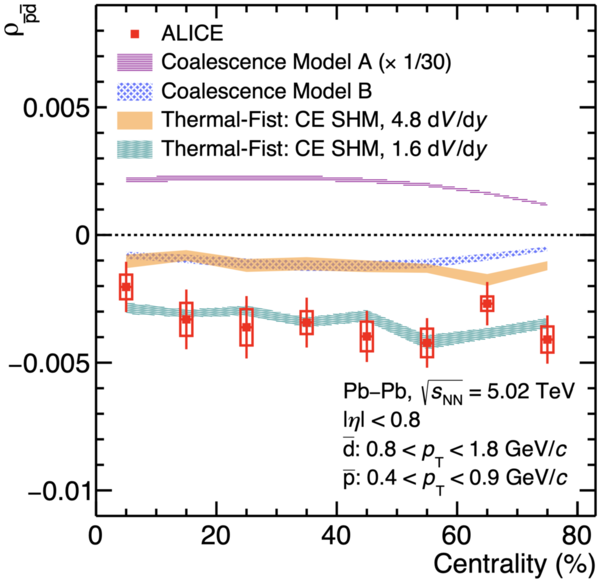 Pearson correlation coefficient between antiprotons and antideuterons as a function of centrality in Pb-Pb collisions. The collisions in which at least one antideuteron is present show a smaller number of antiprotons.

Charm-quark diffusion in the quark-gluon plasma

In heavy-ion collisions charm quarks are produced in initial hard scattering processes and they subsequently cross the quark-gluon plasma (QGP). The interactions with the quarks and gluons of the QGP lead to both a reduction of the charm-quark energy (energy loss) and deflections of their propagation directions. The latter can be described in analogy to diffusion of particles in a dense fluid. Measurements of prompt D mesons (that contain a charm and a light quark) are sensitive to some of the properties of the QGP, including the charm-quark diffusion coefficient. The measurements performed with the data sample of Pb-Pb collisions at 5.02 TeV collected with the ALICE detector in 2018 allowed us to constrain the spatial diffusion coefficient of charm quarks in the QGP via a quantitative comparison of the nuclear modification factor RAA, the elliptic and triangular flow coefficients with theoretical models. The estimated range for the spatial diffusion coefficient is 1.5 < 2πDsTc < 4.5 at the critical temperature for the QGP phase transition, Tc = 155 MeV, and it is substantially narrower with respect to previous publications.

Charmonia in the quark-gluon plasma: varying the binding energy

Charmonia, bound states of charm and anti-charm quarks, can be considered as unique probes of the deconfinement in the QGP. The charm-anticharm quark pairs are produced early in the heavy-ion collisions, but their binding into final-state particles is a longer process. In the presence of the strongly-interacting QGP medium, the binding is screened by the color charge of the deconfined quarks and gluons and the charmonia production is suppressed. The level of suppression depends on the charmonia binding energy and the QGP temperature. At LHC energies there is a counterbalancing process. The initially-produced charm and anticharm quarks interact with the QGP constituents, reaching close to thermalization, and further on can recombine into charmonium bound states. The recombination process is dependent on the size of the charmonia and the degree of thermalization of charm quarks. Therefore, the comparison of the production of different charmonium states can bring essential information on the properties of the QGP. The ψ(2S) charmonium state has ten-times smaller binding energy and twice larger size compared to the commonly-studied J/ψ state. Its experimental study is more difficult because of the much lower probabilities for both production and decay to a muon pair. ALICE reports the first measurement on the ψ(2S) charmonium state in Pb-Pb collisions down to zero transverse momentum. The results show a suppression about twice as large as for J/ψ. Theoretical predictions that include suppression and recombination of charmonia in the QGP describe the measurement.

Accessing the residual strong force between charm and non-charm hadrons

Besides gravitation, electromagnetism, and the weak force, the strong force is one of the four fundamental forces of nature. It acts between quarks and binds them together in hadrons such as protons and neutrons. The residual force that attracts quarks of two separate hadrons is responsible for the binding of protons and neutrons to larger nuclei. While this residual strong force is well studied for hadrons that consist of up, down, and strange quarks, it has never been measured for those containing charm quarks. In ALICE, a special two-particle correlation technique called femtoscopy has been employed, which allows one to probe its strength. By looking at the distribution of the relative momentum difference of charged D meson (a charm quark bound to a down antiquark) and protons (two up quarks and one down quark), we can investigate if these particles rather attract each other or repel. While this force is strongly attractive between protons and neutrons, we have hints that D mesons are repelled from pions and attracted to protons.

Two-particle correlation function of D mesons with pions, compared to the expected Coulomb interaction and a fit that includes the residual strong interaction.