The ALICE Collaboration presents several new physics results at the European Physical Society conference on high-energy physics EPS-HEP2021 this week, as well as the ongoing major detector upgrade for the LHC Run 3, prospects for further upgrades for Run 4, and for a completely new heavy-ion detector for Run 5 and beyond. The ALICE Collaboration contributes to EPS-HEP2021 with 27 parallel talks and 7 posters and a plenary presentation, which reports the experiment's Highlights and Perspectives.

This briefing includes a selection of the main physics highlights and complements the recent briefing for the LHCP2021 conference.

Heavy-ion collisions are the only laboratory for the study of the high-temperature phase of quantum chromodynamics. Heavy atomic nuclei are smashed at ultra-relativistic energies and a transition happens from ordinary nuclear matter to a quark-gluon plasma (QGP): thermalized QCD matter which behaves as an almost perfect liquid.

Particle jets are among the experimental tools for the study of the QGP. Jets are showers of particles originating from the fragmentation of an energetic quark or gluon. In lead-on-lead collisions at the LHC the production of such jets is very common and they are detected by the experiments as clusters of particle trajectories and energy depositions concentrated in cone-like shapes. Before reaching the detectors, jets traverse the quark-gluon plasma and the strong interaction modifies them compared to jets produced in proton-on-proton collisions. The plasma is extremely opaque to jets: the observed rate of even the most energetic jets is reduced to approximately half. The interaction does not only modify the energy of jets, but also their internal structure, in a specific way that can provide insight into its microscopic properties.  In the same way that in the field of spectroscopy the molecular structure is studied by the absorption of the different light components, the absorption of jets with certain internal structure is used to study the density and quantum properties like the color correlation length of the QGP. 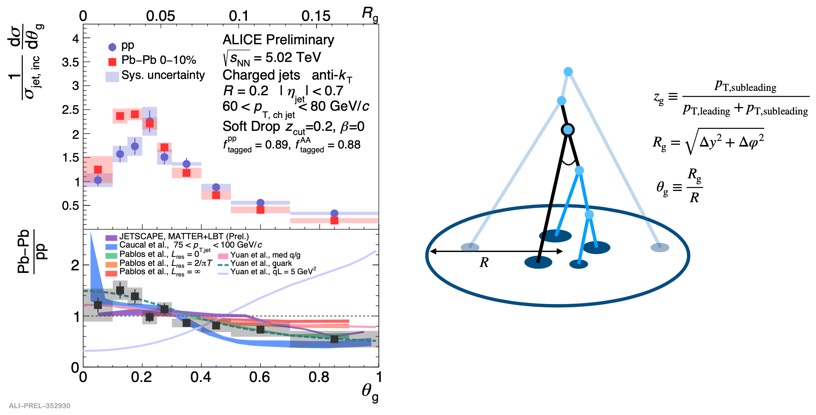 Normalized groomed jet angle distributions in Pb-Pb and pp collisions, and their ratio in the lower panel. The sketch illustrates the definition of the groomed jet angle θg = Rg / R for a quark or gluon splitting within the jet.

A new study by the ALICE experiment measures the internal jet structure using grooming, a technique that allows to select two hard prongs within the jet. Those selected hard prongs are expected to be correlated to a quark or gluon hard splitting in the jet shower. ALICE reported the aperture angle of such hard splittings, θg. Jets with a large θg are more absorbed by the quark-gluon plasma, leading to a narrowing of the measured jets. This feature is best described by theoretical models in which the plasma resolves the two hard prongs and interacts incoherently with them (e.g. the model by Pablos, Lres=0) and by models with a dominance of quark-induced jets (e.g. the model by Yuan, quark). In general, this measurement demonstrates sensitivity to the angular resolving power of the quark-gluon plasma and provides a new path for novel differential jet substructure measurements to further elucidate the microscopic nature of this form of matter.

The puzzle of jet azimuthal modulation in p-Pb collisions

The jet quenching increases with the path length of the originating quark or gluon in the quark-gluon plasma. Therefore, the almond-shaped overlap region in case of non-central collision of the two Pb nuclei results in azimuthal asymmetry of the produced jets. The second-order harmonic coefficient of this azimuthal distribution (v2) is dominant and reflects the quark or gluon energy loss in the medium. In p-Pb collisions, v2 is expected to be zero, given the small size of the collision system and the absence of any jet-quenching signature in previous measurements. 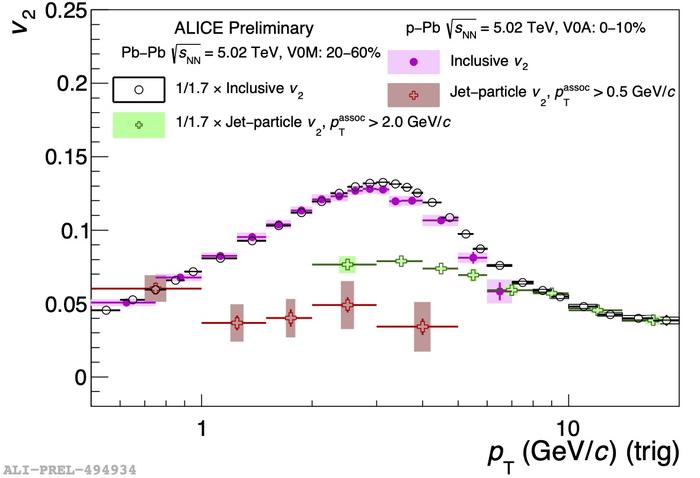 Azimuthal anisotropy coefficient v2 of jet particles and of all particles (inclusive) measured in p-Pb and Pb-Pb collisions.

Uncovering the properties of hypermatter

The matter surrounding us is made up of atoms that contain a nucleus in their core consisting of protons and neutrons. At the LHC, we can create more exotic forms of such nuclei like the hypertriton (3ΛH), a small nucleus consisting of one neutron (n), one proton (p), and one Lambda (Λ) particle. Lambda particles are similar to neutrons, but they contain one strange quark instead of one d quark. Despite almost 70 years after its discovery in cosmic rays by Danysz and Pniewski, the hypertriton is still full of surprises and unknowns. 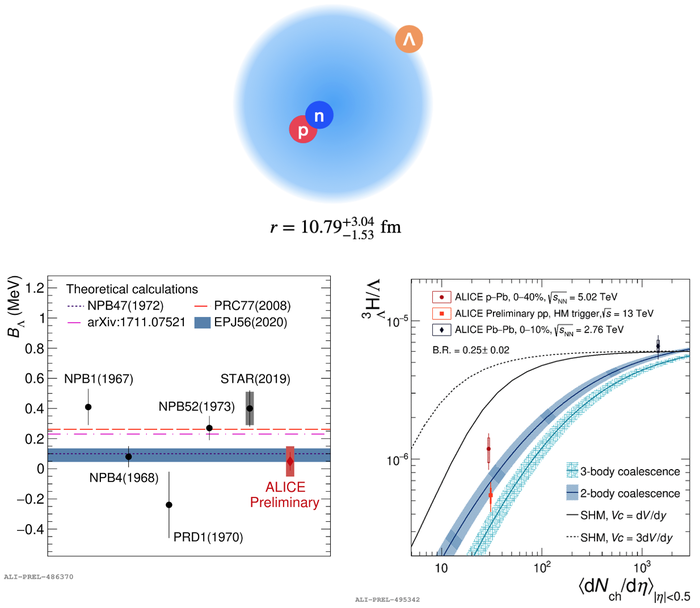 Schematic drawing of the hypertriton structure illustrating the weak attraction of the Lambda to the proton and neutron (top).  Binding (Lambda separation) energy of the hypertriton (left). Production yield of hypertriton with respect to Lambda particles in comparison to statistical-thermal (SHM) and coalescence models (right).

At EPS-HEP2021, the ALICE experiment shows a new measurement of the binding (Lambda separation BΛ) energy of the hypertriton that confirms the weak attraction of the Lambda to the proton and the neutron. This weaker attraction is also expected to have consequences for its production via the coalescence of protons, neutrons, and Lambdas. In collision systems such as pp and p-Pb, the production of hypertriton in coalescence models is expected to be suppressed with respect to particle production models that are based on a thermal equilibrium of the particles produced in the collision. This suppression is now measured for the first time by ALICE at the LHC.

The inner workings of proton-proton collisions under a new angle

Proton-proton collisions have been used for 50 years at hadronic colliders as tools to study the strong interaction and to search for new particles. The internal partonic structure of the proton, with three valence quarks, virtual sea quark-antiquark pairs and gluons, is now known in great detail. However, the way in which, in proton-proton collisions, the energy carried by these ‘partons’ is transferred to the particles produced in the collision is still a topic of intense research. In most theoretical models, the initial partonic content of the protons and the number (‘multiplicity’) and energy of the produced particles are connected through the concept of multiple partonic interactions (MPI), so that it is more likely to have a large number of outgoing particles when more than one pair of partons interact. Experimental studies of these inner workings of proton-proton collisions have mostly relied on the inspection of the particles produced in the plane transverse to the direction of the proton beams.

Sketch of pp collision (left). Correlation between the zero-degree energy of neutral particles ZN and the multiplicity of charged particles dNch/dη in the central part of ALICE, both divided by their average in all collisions (right). The measurement is compared to three theoretical models of pp collisions.

A new ALICE paper addresses the question from a new angle, namely a (close to) zero angle. This is the angle, with respect to the beams, at which the ALICE zero-degree calorimeters measure the energy of the remnants of the two protons that have collided. This energy can be seen as a complement of the energy that initiates (multiple) partonic interactions and it probes the collision in a way that is orthogonal, and causally disconnected, from the standard observables. The zero-degree energy, in the figure shown as a ratio of the energy ZN of neutral particles to the average in all collisions <ZN>, clearly decreases when the number of charged particles dNch/dη seen in the central part of ALICE increases. For example, high-multiplicity collisions with dNch/dη 4.5 times larger than the average collision have 4-5 times less zero-degree energy than average collisions. The experimental measurement shows for the first time that such high-multiplicity collisions tend to be ‘central’ and to involve a larger fraction of the energy of the incoming protons. The commonly-used models of proton-proton collisions describe the measurement only qualitatively.