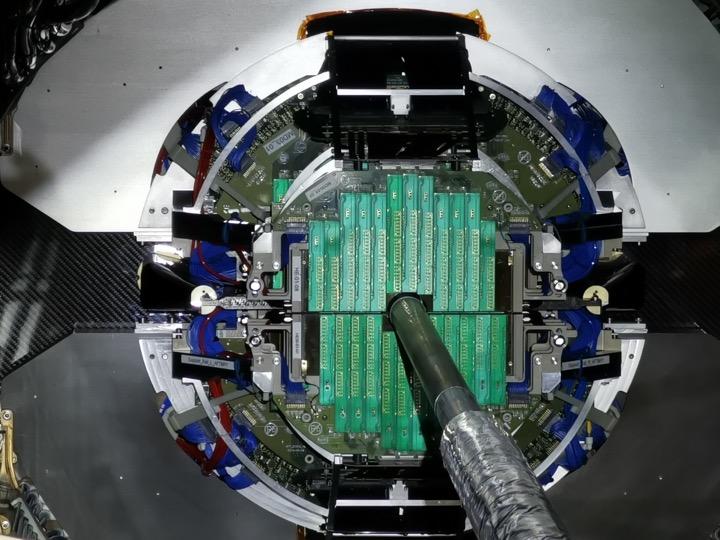 The new Muon Forward Tracker, one of ALICE’s main subdetectors, was installed in the cavern in December 2020.

The upgraded Muon Forward Tracker, one of ALICE’s main subdetectors, was installed in the cavern in December 2020. After the Time Projection Chamber (TPC) and the Miniframe returned to the ALICE detector cavern in the past months, ALICE ended what was a very productive year 2020 on a high note: the collaboration successfully mounted the Muon Forward Tracker subdetector into the TPC, inside the main experiment’s detector. The two MFT barrels were transported to the ALICE site and lowered down the 60m deep cavern in the first week of December. The subdetector was then positioned to the nearest tenth of a millimetre precision inside a carbon composite cage sitting in the very centre of the TPC – a challenging undertaking in terms of position precision. This sizeable achievement crowns more than five years of design, construction, and qualification tests conducted by a dozen research institutes in Europe, Asia, and South America.

The Muon Forward Tracker (MFT) is a half a square metre-wide pixel detector constituted of more than 1,000 silicon sensors placed on the detector’s C-side. The silicon pixel sensors, called ALPIDE, were developed by the ITS (Inner Tracking System) and MFT project teams. Each chip houses half a million pixels in an active area of 4.5 cm², a very high pixel density that translates into an enhanced resolution, for high-precision measurements of particle tracks. The ALICE detector will thus be equipped to tackle the rich physics opportunities offered by the increased luminosity of the future LHC runs.

The MFT will complement the current muon spectrometer, which detects muon pairs generated by the proton-lead ion collisions and reconstructs the vertexes from which these pairs originate. The 5 micron position resolution of the MFT’s silicon sensors will, among other evolutions, enable the distinction of muon pairs originating from charm hadron decays from those issued by bottom hadrons – a crucial step towards the analysis of the respective properties of charm and bottom quarks. This in turn allows ALICE scientists to delve deeper into quarkonia – bound states of charm and anti-charm or bottom and anti-bottom quarks – and its interaction with the quark-gluon plasma produced in high energy heavy-ion collisions at the LHC.

The successful installation of the MFT detector inside the ALICE detector represents a major milestone on the road of LS2 upgrades, as Luciano Musa, spokesperson of the ALICE collaboration, explains: "The full MFT detector operated for several months above ground before its installation, which established that it fully meets the experiment’s requirements. Thanks to the thorough preparations, the installation of the MFT at the heart of the ALICE detector, a very complex and delicate operation, went very smoothly. This is a big milestone for us, and a nice ending to a difficult year”. Next step on this road: the commissioning of the MFT and its integration into the ALICE operational systems, which will prepare the whole detector for the first beam of the LHC Run 3 and the physics challenges it will open.

More details about the MFT can be found in the MFT Project link. 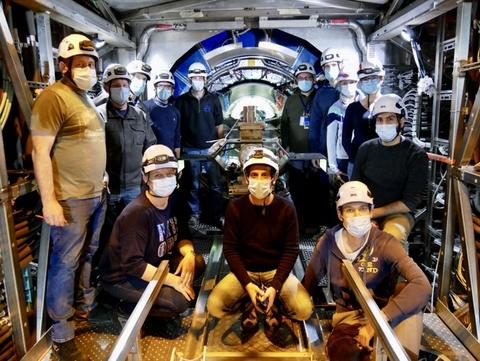